Mike and Diane Hall
Creating heavenly violin music
Diane is a former member of the Cedar Rapids Symphony (now Orchestra Iowa). She was a music major on scholarship for 2 years at the University of Iowa before completing her BSN degree in nursing. In addition she studied music for a year at the University of Minnesota. She was a scholarship student at Interlochen. She has played in various programs in several large churches in Minneapolis. As an arranger and composer, she has written music for a Christian women's retreat and has also written piano and violin arrangements. 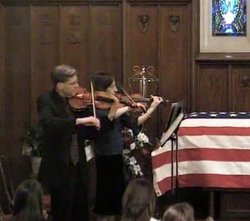 Together Mike and Diane have played church events, memorial services, anniversary parties, and other programs. They have played in church productions (including the Passion Play at First Assembly of God in Cedar Rapids). They have played special music as a duet in various churches. They currently play regularly on a church worship team. They also have played events for Fire Around the World, Gospel Mission, Serve the City, Awaken the Dawn, and at the CR Sanctuary. Their repertoire includes classical selections as well as Christian hymn and worship song arrangements that would be appropriate in various church settings. Together they have created many unique violin duet arrangements that were basically improvised!